Doug Sax on the Loose at CES

have just returned from CES In Vegas and I thought you and your readers might like to have an insider’s view of the show.

In light of the economic conditions would strongly urge the CES to think about the way the Audio Engineering Society does it. The AES has one show a year, an­nually alternating between the West and East coasts. That countless manufactur­ers have to go through this type of maso­chistic endeavor twice a year is inhumane. The expense for the retailers to attend is out of sight. To what purpose? Certainly nothing earth-shattering in any consumer lines will happen in the next six months.

Sheffield Lab, as a manufacturer, dis­plays at all CES’s, and it is the only format public exposure that we use. This is only the third show that I have attended in live years. I went to gain knowledge first-hand, take the pulse of the audiophile industry. ­As you know, both of my business enter­prises, Sheffield Lab and The Mastering Lab, are concerned solely with the phono­graph record, and the coming of the Com­pact Disc is an event I could not fail to evaluate. It remains an enigma. It offers more than an hour of uninterrupted music in a very compact size. And yet, the sound is disappointing: technical perfection in me­diocrity. I cannot believe that a true music lover will be able to accept it. I found it less of a threat to my survival than I had ex­pected -

Now off to the Riviera Hotel to see the real nuts. The harsh economic conditions have already taken their toll in the record in­dustry. The decline started five years ago. and has resulted in the closing of pressing facilities, the firing of countless employees by all record companies, and the depres­sing aroma of panic permeates everything. Two independent disc mastering facilities bit the bullet in 1982, and more will follow in 1983. The men are being separated from the boys. (Where are my hormones?)

The same is true for the manufacturers of High End audio equipment. Chapter Eleven is becoming a best-seller. Talk of com­panies in trouble abounded along with comments of regret and alarm. The hard reality is that many more companies, large and small, are in serious trouble. As with the record industry, their production capa­bilities will have to be sleeved down to the size of the market. Our economic depres­sion is not all:The consumer has a positive­ly endless choice of consumables to chal­lenge the audio dollar in the form of video recorders, video discs, video games, and those amazing home computers. Any retail­er must choose carefully as to where he is going to spend his money and must decide accurately which way the wind is blowing. It certainly wasn’t blowing towards the Riviera, and, frankly, the interest shown by retailers to the High End display at the Riviera was lukewarm at best.

As one involved in audio, I could not be but impressed by what was really going on at the Riviera. Each small suite repre­sented, for the most part, a true music lover, someone whose involvement in the repro­duction of music has moved them to com­mit all their resources to some area in the playback chain where they feel they can make a meaningful contribution.

I had the pleasure of meeting John Iver­son who was showing his new amplifier. A quick glance inside his amp revealed a staggering parts count. Assuming that all are there for a reason, the time and energy involved becomes obvious. John, of course, is only one man in one room and the rooms go on and on. John was smoking or­dinary cigarettes and guzzling Jack Daniel. After he filled my glass to the rim, I asked him the obvious: What the hell are you do­ing back in the sweat box? Said he, laugh­ing, “Once you’re bitten by the audio bug you can’t shake it. It’s a life-long ad­diction.” The Riviera was full of addicts, and it is with sorrow that I foresee that some are not going to survive their addic­tion.­ The rest of my stay was the enjoyable part. I got to be an audiophile for a day. With my good friend Bob Neil from Visalia, I went through many of the rooms to hear what there was to hear. A note to exhibitors:

Always have your system playing. A room with no music in it is just another dreary hotel room. Do your talking somewhere else.

Trends? I think so. Dynamic speakers are getting better. It was a bad day for elec­trostatics. They ranged from fair to awful. Naturally, I would miss the set that ap­parently thrilled everybody: the Sound Lab’s A/1 designed by Dr. Roger West.

My method: Stick my head in the door -if the sound was inviting, go in and give the system a fair shake. My interest at this show was in loudspeakers since many turn­tables, cartridges, and amplitiers are doing the job. Many of the speakers I heard could not be called systems. They might handle some area of the signal properly, but they were failures as systems capable of doing most ot what should be expected. I should mention that I feel this way about most of the speakers that have ever been offered for sale.

I didn’t make all the rooms, but I did hear some systems that were, indeed, systems. Vandersteen, the RS-1 of Intinity, Meridian, Linn, the nefarious Klipsch, and, surprise, the LJ260 of JBL. The surprise is that this is the first JBL I have ever considered a sys­em. Maybe John Eargle has finally got something through. All are compromises, but, then, I don’t expect much from a loudspeaker.

After five hours of this madness we were pooping out, but we hear a vocal -Amanda’s, it so happened-coming from some unknown speaker. It is instantly obvious that this is the best I’ve ever heard her sound, save for standing next to her. We went in and sat down and really listened. Everything sounded glorious and musical. I introduoed myself to Arthur Regal from Cedarhurst, N.Y. He is president of ESB USA and will be importing the ESB line from Italy. He asked me if I would like to hear some other Sheffield records. No. anything but that. He then put on a Proprius record­ing, Cantate Domino. Again, the best reproduction of voice have ever heard. The recording was superb. (Every audiophile should have some Proprius recordings, and the same is true of the Opus 3 line from Sweden.)

Impressed out of my shorts, we bade adieu to ESBand ventured further down the hall where I had a rather joyous meeting with my old friend Leode Gar Kulka of Sonic Arts. I met Leo in 1961 when Lincoln and I were attempting to make a direct-to-disc recording of a solo piano -and mono at that. He had the only Neumann cutting system In Los Angeles. He played some of his new recordings for us, and I ran around the show until I collared a pressing of our disc of Arnold Steinhardt and Lincoln doing the Strauss sonata, it sounded unfamiliar on the set-up in Leo’s shared room, and next door we tried it on some weird-looking speaker that sounded even weirder. Since I feel this is the best recording I have ever made, was disappointed that I couldn’t show Leo its virtues. Bob suggested that we go back to ESB to listen to the Strauss, great idea, Bob, We went and listened to the whole sonata. I can’t remember the last time that listened through a complete work. The result was stunning, way beyond acourate; a seamless, effortless recreation of the instruments, the room, the musician’s interplay and emotion- I have never heard a speaker re-create the spatiality of these Italian wonders. The ESB 7/06, A restorative experience. Maybe it is all worthwhile. Special accolades to everything in the playback chain which performed without a trace of mechanical or electrical presence. SOTA sapphire turn­table, Lustre 801 arm, high output SDX 2000 Supex, Threshold FET 1 preamp, Threshold S500 power amp.

It was then 9 p.m. and everyone fam­ished. We went to the buffet at Circus, Circus; Bob Neil, Arthur Regal, Renato Giussani (the designer of the ESB 7/06).

I pumped Renato concerning the design parameters of his wondrous loudspeaker. Apparently he has done much research into what a speaker must do to allow the ear to receive space and depth information. What we all heard was no accident. As a professional, I can guarantee that the speaker will fail in many areas; as an audiophile tor a day, I know it is the finest loudspeaker I’ve ever heard.

At a table nearby some people are con­versing passionately over amplifier prob­ems and crossover designs. Bob Iverson stops at our table and we exchange pleasantries; addicts all.

I have just listened to Leo’s Sonic Arts recording of Stephen Kates doing the Rachmaninov Cello Sonata. It sounds love­ly, and it’s digital yet. Harry, what’s happening to me? 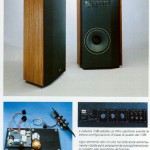