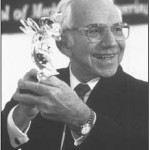 Leo Beranek was born in 1914 and spent his childhood in Mt. Vernon, Iowa. He attended Cornell College in Iowa and worked while studying as a radio and small appliance repairman. He received his Bachelor’s at Cornell College in 1936 and worked for Collins-Rockwell radio company in Cedar Rapids, Iowa. A chance encounter with Glenn Browning lead Beranek to apply to Harvard University for graduate study, where he was awarded a full scholarship. While at Harvard, Beranek begins working with Professor Hunt as his assistant at the university’s Cruft Laboratory. Beranek began work on a sound control project for the U.S. National Defense Research Committee in 1940, attempting to control vibration and sound in aircraft used in the war effort. The Kamikaze pilot dilemma of W.W.II initiated Beranek’s second defense project, the effort to speed up marine on-board communications. Beranek, with co-founders Bolt and Newman, starts Bolt, Beranek, and Newman in 1948. BBN starts as an acoustical consulting firm, but later entered the budding industry of computing and did contract work with NIH and ARPA.

Beranek discusses his childhood fascination with radio and his education at Cornell College (Iowa) and Harvard. He details some of the work he did in acoustics during World War II, and the formation of a consulting form BBN, after the war. Beranek also discusses some of the events surrounding the formation of the IRE Professional Group on Audio and its relationship with the Audio Engineering Society.